Synchronized measurement technology (SMT) with its benefits is already recognized as an important enabler of next generation power systems. Confidentiality of measured data regarding the energy trading and power system security issues presents a major obstacle for involvement of academia in direct monitoring of the transmission network for research and development purposes. The costs of deploying, configuring and connecting classic PMU devices and associated PDCs make the technology even less accessible to R&D teams. The idea of the WAMSTER system is to provide a solution to these problems. 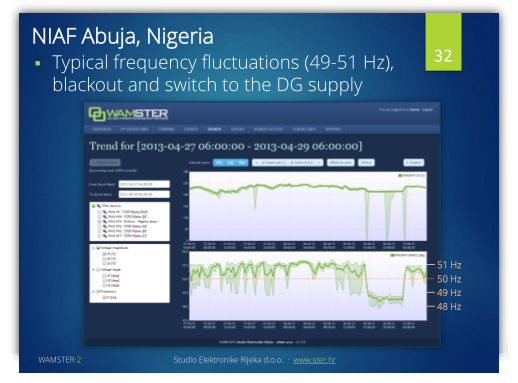 WAMSTER project was started at “Studio Elektronike Rijeka” (STER) at the end of 2009 as a coordinated work with Department of Power Systems at the Faculty of Engineering, University of Rijeka (RITEH), to meet the increasing needs for remote data acquisition in various projects for the Croatian TSO. The system is based on two main characteristics: 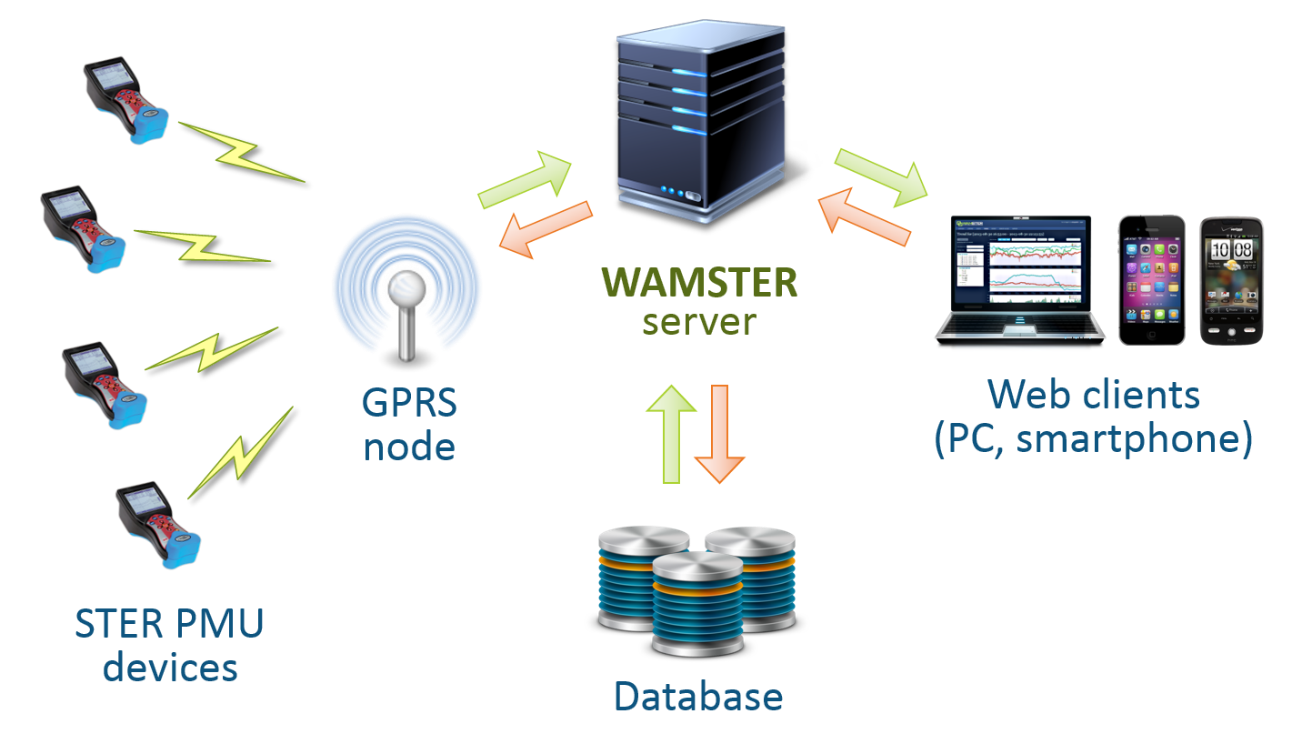 Figure 1. WAMSTER system overview. Handheld STER PMU devices (shown on the left) communicate with the server over the mobile (GPRS) network. WAMSTER server processes received synchrophasors, drives them through the event triggering system, stores them into the database (shown at the bottom), sends notification messages to clients, and renders an online interface for web clients (right).

Compared to a classic PMU/PDC system, WAMSTER’s PMU devices are typically deployed within 15 minutes of arrival on site, with measurements immediately available to all team members from any web-enabled device.

Taking into account the unreliability of mobile network data transfers, WAMSTER does not aim to be a tool for real-time control and protective applications, but rather a near-real-time online monitoring tool with various event triggering and data export capabilities. As such, it is recognized by the TSOs, DSOs and academia as a cost-effective and efficient disturbance detection and localization tool, especially for post-mortem analysis.

The concept established by the WAMSTER can be considered as a “wireless worldwide data” PMU source and concentrator. Using the globally available GPRS mobile network and the Internet accessible server as a data concentrator, WAMSTER allows rapid deployment and unlimited network expansion possibilities.

More details about Wamster's architecture can be found in this article.

Being small sized and wirelessly connected to server, STER PMU can be placed in virtually any compartment of the secondary equipment. Since there are no rotating parts or ventilation openings, device can be placed in any position. All connection sockets and leads are made according to highest safety standards for hand-held measurement equipment allowing fast and safe connection to the secondary circuitry. The optional magnetic baseplate allows prewiring the device to the modem, and easily attaching the device to cabiner doors or backplanes.

Both GPRS and GSM antennas have watertight housing with magnetic support for easy position at indoor or outdoor locations. A 12 mm aperture in barrier, vent grill or under the door is sufficient for connecting GPS unit with PMU.

Aim of the measurement campaign project by our client Tractebel Engineering in UAE is to collect measurement data needed for a reactive power study and distribution load modeling for the Abu Dhabi Transmission & Despatch Company (TRANSCO) and Abu Dhabi Water and Electricity Authority (ADWEA), with the goal of developing a dynamic reactive compensation system. To provide the necessary measurements, 20 STER PMU devices were installed at several locations around UAE, including the Abu Dhabi Critical National Infrastructure Area. WAMSTER Team fully assisted the on-site installation and configuration. More than 250 event triggers were configured to detect various fluctuations in the grid across the country. Read more...

Seychelles Public Utilities Corporation (PUC) and Seychelles Energy Commission (SEC) recently entered into an agreement with our client Energynautics to improve levels of renewable energy generation on the Indian Ocean islands. The study will be performed in 4 steps, from gathering information about the grid, through drafting the grid code and examining tariff levels, ending with final templates and models for the full range of possible renewable energy systems. Devices were installed with ease by our client. Read more...

UMEME24/7 is a FP7/Eurostars funded project with the objective to develop and test solutions for improving power supply and stability for consumers in Kenya based on social, economic and technical measures. Energynautics Gmbh from Darmstadt, Germany, is leading measurement part of project. Six PMUs were placed in different parts of Kenya in December 2012. WAMSTER system serve as an ad-hoc WAMS for collecting wide area disturbance dynamics in the first phase of a project. In the second phase, collected knowledge and installed WAMS and PMUs will be used for predicting black-outs or voltage disruptions. Formed close loop will control back-up diesel gensets in order to mitigate the black-out conditions. Read more...

A demonstrational measurement campaign in Nigerian LV grid took place during April and May 2013. Organized and coordinated by Dr. Rawn from KU Leuven, Belgium, this demo aimed to check the availability of Nigerian mobile telephone network in proposed “Bridging SCADA” concept. Bridging SCADA attacks a problem of electrical systems monitoring and control in areas without convectional communication infrastructure. This online demo for the first time provided a live feed of system frequency to the National Control Centre at Oshogbo.

An ad-hoc network consisting of 4 PMUs located in two hydro plants, neighboring a 110kV substation and the closest 400/220/110 kV substation in northern Croatia from July 2012 till September 2012. Installation of these devices took only a couple of hours. A two months long trial period revealed completely new dynamics of the problematic generator set. The results of the trial system were so fruitful that a permanent installation on generators and HV substations is planned in the next iteration, incorporating an additional input to the upcoming rail mounted version of STER PMU for the rotor position pick-up.

WAMSTER has been used as provider of synchrophasor data at the initial step of the SIPS project design for TSO. Project has been conducted by Faculty of Engineering, University in Rijeka. Six STER PMUs have been installed in 110 kV substations forming a loop around Croatia’s apital Zagreb from September 2011 until June 2012. Data collected by WAMSTER has been used for model tuning in conjunction with data captured by the existing SCADA system. Several captured events revealed previously unknown dynamics of the system, and the use of WAMSTER allowed these new findings to be incorporated into the SIPS algorithm definition at an early design phase.

WAMSTER has been used as the measurement and communication platform for the CARWAMS (Croatian Academic Research Wide Area Monitoring System) project in 2010 and 2011. In this project STER PMU units were installed on 0,4kV grid on four Croatian universities, located in different transmission areas. The aim of the project was long term synchrophasor data base lining and disturbance events capturing and several WAM systems have been formed on HV-MV-LV levels. PMUs are still permanently installed in the Laboratory for Control and Protection.